Home | ENGINEERING THE PSYCHOLOGY OF SALVATION 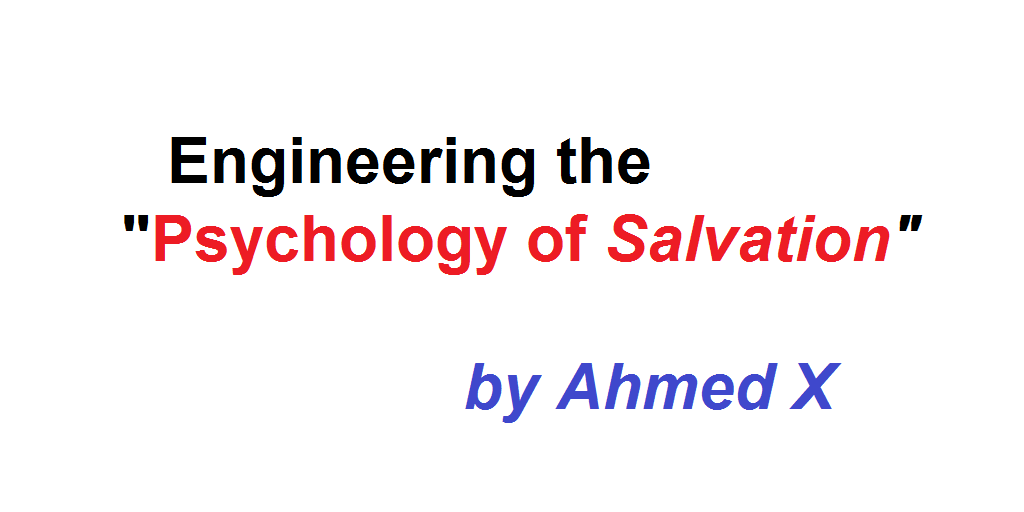 The Most Honorable Elijah Muhammad and The Hon. Minister Louis Farrakhan are Master Teachers here to Instruct a lost humanity on the Science of Everything in Life and to bring about a Universal Family. They teach us the Nature of Reality using Bible, Qur’an, and The Supreme Wisdom Teachings Revealed by Allah (God)-Who Came In The Person of Master Fard Muhammad in 1930.  Fard Muhammad revealed a Truth to us designed to “OPEN THE RUSTY LOCKS” (Unlock our Mind). That Great Truth that was revealed to us (babes) is The Reality of God   (That God is Man). Therefore, when one reads Bible and Holy Quran they are reading their own Nature on Paper because we Lost Contact with GOD and SELF.

The Purpose of this article is to Question the Nature of Salvation. What is Salvation? How does it work? When can we have it? Where is it located? Who gives it? Why is it necessary?

I have reflected deeply on this subject of Salvation because it comes up in daily conversation often in familiar questions and statements such as: “Are you saved?,” “I personally believe in Jesus Christ as my Lord and Saviour,” “I’m not concerned with _____   because I know where I’m going,” “I got Jesus!,” “I’m praying for you Accept (Confess) Jesus, so that you don’t miss your Salvation, ” etc., etc.

Where did this personal, individualistic, all about me (using Jesus as a COVER), Concept of Salvation come from? Is it Natural? What is the truth or falsity of it? Does it involve Psychology? What Psychology?

In the Western World,  White Rulers have made the study of Psychology a Required course for  anyone who aspires to have a career in the Military, Business, Teaching, Social Studies and Religion Why? And what is the Root of Western Psychology?

The Bible says that “False Prophets” would cause many to lose Salvation by following the wrong direction. This is interesting in that it suggests two directions, one true and the other false.  Jesus sets before us “The Way” yet he tells us we must choose which way, Life or Death. Evidently, we were on a DEATHMARCH already. He says that he represents Eternal Life and comes that we might have Life, Abundantly. All of this involves Business. The Hon. Elijah Muhammad taught us that BUSINESS is The Science of Life Activity. Evidently, the Black Community has been following “wolves in sheep’s clothing” (Black Leaders with the Mindset of White Supremacy).  Our Communities reflect the Substitute Knowledge that we study, which determines the Fake Life Activity (Business) we engage in, and suffer from.

Do Allah (God) and Satan have Psychologies? Does the Bible and Qur’an reveal Psychology in a way that if Properly understood would open the eyes of the Blind to the Reality of Satan, The Man of Sin and This world he made in opposition to The Man (GOD), The Creator of Heaven and Earth?

If the Concept of Salvation involves the Spirit of God, The Holy Ghost (spirit) and The Spirit of Truth, but then you also have Unclean Spirits that lead to Hell and Damnation, then what is the Nature of SPIRIT? What gives Spirit a Positive (+) or Negative (-) value? DO SPIRITS HAVE PSYCHOLOGIES OR IS IT THE THINKING (MIND) OF MEN AND WOMEN THAT GIVE CHARACTER, FORM AND DIRECTION, TO THE SPIRIT (the Force, Power or Energy that SHAPES matter(s), realities, worlds)? ??????????????????????

What is the ORIGIN of PLANNING, DESIGN & SYSTEMS DEVELOPMENT? Do Ghosts do these things, or do men and women do them, and why?

HOW DOES JESUS SAVE? How did we come to the Dominate Belief about Salvation and is this Belief “a way which seemeth right unto us, but will End (Result) in DEATH? The ‘Hood is Dead with Churches everywhere.  What’s Missing?

As I write this article, Military Fighter Jets are flying by my House with their jet engines roaring. They are practicing Maneuvers supposedly for an “AIR SHOW.” What does the Government Wish to SHOW and what does the Government Try to HIDE concerning the Technology that is in the Air? This relates to my subject.

The Children of Israel yearned for Liberation and Salvation, yet they did not know if, or when, God would give them a Moses and Jesus. It was Pharaoh and King Herod that expected God to ACT on behalf of His suffering people and, like J. Edgar Hoover (who KNEW God would Give us a MESSIAH), they Planned AGAINST it. Divine Deliverers, Raised by God to MOVE His people, are written of as being Rejected, Initially, by the people for whom they were sent & raised from. Why didn’t THE CHILDREN OF GOD MOVE with the Man of God? Bible, Quran & U.S. Government Documents ALL CONFIRM that IMAGE WARFARE (false labels and accusations) are the Primary Weapon used against God’s Servants!

What role do the Psychological Chains of Slavery and Ignorance play in this? Black People in America have suffered over 400 yrs. Not knowing THE PLAN OF GOD.  We have adopted ignorance & self-hate out of our Slavemaster’s  mis-education, and hatred, of us. Most Black people would never think that God would do for us what he did for others who were enslaved in the Scriptures. We have more faith that our enemy will have a change of heart towards us, be nicer to us, and make our existence in America (as slaves) a little more comfortable. But The Comforter is The Spirit of Truth Who Comes In The Name Of Jesus, which means he comes under the function, purpose, mission and nature of that Title.

On October 16th, 1995, The Million Man March – Day of Atonement, Reconciliation & Responsibility, Shook this Satanic World. What was the Value of that Day in Relationship to the Concept of Salvation?

LOUIS FARRAKHAN and THE PEOPLE FROM WHOM GOD HAS RAISED HIM have a Particular Identity, Purpose & Mission FROM GOD! Our SALVATION demands that we Be About Our Father’s Business! Our Father’s Business IS NOT to Maintain this satanic World of WHITE SUPREMACY AND GLOBAL MILITARY DOMINATION and Subjugation of the Native, Ab-Original People of the Earth! So when God Comes and raises Jesus it represents WAR!

Thank You For Reading! Peace Be Unto The Righteous!